The TRUTH about the British Monarchy; the “Golden Jubilee” (50 year reign) of the queen who never was:

“The word British is Hebrew and it means “Covenant Man” or the “People of The Covenant. Elizabeth Mountbatten, also known by the aliases Elizabeth Windsor and Elizabeth the Second, who has never officially been crowned, because she was crowned sitting upon a fake Stone of Destiny, is, like all of her predecessors, from the royal line of king David of Israel and the British Throne is the Throne of David that is to be inherited by Christ, during the Second-Coming.

The next SICK JOKE is that the monarch claims to be “Defender of The Faith”, whilst doing the opposite of everything that Jesus said.” – JAH

This is another sick joke – Charles as Defender of The Faith: 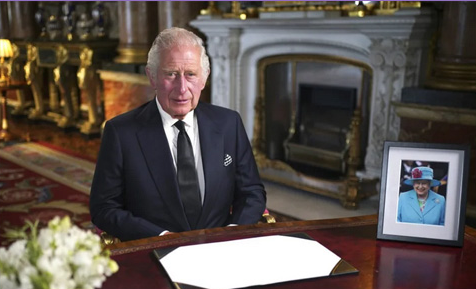 At the Accession Council on Saturday 10th September 2022, Charles was proclaimed Defender of the Faith.

Some who hoped that the link between Church and State would be severed altogether on the death of Queen Elizabeth II.

“This oath is a requirement of the 1707 Act of Union between the Kingdoms of England and Scotland, and signing it was his first act as king. The Established Church of Scotland is Presbyterian, and recognises only Jesus CHRIST as ‘King and Head of the Church’.”

BUT – The Church of Scotland’s claim to recognize Christ is false.

The “established” Church of Scotland does NOT recognize Jesus Christ as King. He hasn’t heard from them, nor have they helped Him in bringing out the real Stone of Destiny in Scotland.

“A people always get the government they deserve, because they become complicit in the evil that they fail to oppose. So where does this leave you?

Whatever you believe – know that Christ IS King of Scotland and it WILL be given Him. When are you going to support Christ, and The Law, instead of the arrogant, satanic, criminal usurpers and their evil, fraudulent system that they use to rob and enslave you? Why don’t you get off your backsides and start helping Him, so He can help you?” – from YOU ARE A SLAVE – Rejection of God’s Authority by the Courts & Crown (Scotland)

Instead of helping Christ, they arrested Him.

His “Minute of Notice” put an end to their plans:

“On September 4, 2017, immediately after receiving JAH/Christ and Stephen Crielly’s “Minutes of Notice”, the Procurator Fiscal decided not to proceed with the case against them. The Minutes of Notice were hand delivered on September 4th, and the letter of not proceeding was issued September 4th. It went out in that day’s mail. Crielly and JAH received the letter in the morning post on September 5th.” – King of Scotland – Decision not to proceed against King of Scotland by Edinburgh Procurator Fiscal

See also: Procurator Fiscal Decides Not to Proceed with Case Against JAH Muad’Dib and Stephen Crielly

While He was in Scotland for almost a year, awaiting the trial that never happened, Christ searched for the Real Stone of Destiny – on foot, in meetings, by newsletter, and in videos.

My followers were to save My world – by keeping My Commands, by close union with Me, and by the indwelling Power of My Spirit.

But they were to be a peculiar people. My religion which was to change men’s lives, and was to be so revolutionary as to separate families and re-organize governments, has become a convention, tolerated where not appreciated.

Its Truths have been modified to suit men’s desires. Its followers carry no flaming sword, they bear no Message of a Love so tender as to heal every wound, so Man delights in his ‘Self’-sufficiency, and seeks to persuade himself that all is well. Can he deceive a loving, understanding Father, Who **knows** that under all the boasting there lurks fear; longings; despair?

Can I leave man so? Can I offer him Calvary, and if he will have none of it, leave him to his fate? I know too well his need of Me. You can help Me.

Do you know why the church removed the Book of Enoch from The Bible? To hide The Truth.

To search an exact phrase, use "quotation marks".